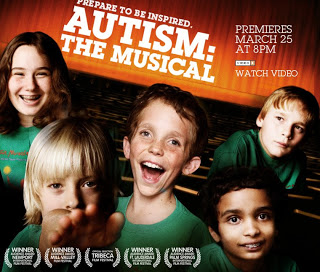 No, this isn’t some twisted Broadway show, where any topic becomes a musical. It’s a thoroughly engaging documentary about a musical theater program in LA for kids with autism.

I saw it at the Margaret Mead Film Festival in NYC last November and found it gave fabulous insight into autism, which has become one of the most media-covered children’s disabilities in recent years. The documentary doesn’t just focus on the kids and their work in the theater program but explores their relationships with their parents and siblings and those parents and siblings relationships with them and each other. Several parents honestly divulge the complexities of nurturing a child with autism and the toll it takes on marriages and other relationships.

But even with its serious side, “Autism: The Musical” has a feeling of joy. The kids have their ups and downs, but they focus on their music or preparing a scene for the musical with their own brand of intensity. And of course, given the intrusion of some negative behaviors from the children because they have autism, the film has the underlying tension of any good narrative, because as a viewer, you can’t wait to see how the musical turns out.

One particularly poignant scene prepared for the musical and written by several of the kids has them dramatizing the teasing and mistreatment they receive from non-disabled children. The scene smashes the myth in many people’s minds that children with autism don’t care about relationships with others.

That’s what makes the film so groundbreaking — kids with autism being portrayed just like other kids, rather than as having some medical diagnosis or being a savant. Henry chatters on about dinosaurs; Lexi sings beautifully and emotionally; Adam just wants to play his cello; Wyatt loves Harry Potter and telling a story, and Neal tries to communicate without getting frustrated. Just typical kids.

Directed by Tricia Regan, “Autism: The Musical” follows the efforts of Elaine Hall, founder of The Miracle Project, described as “an innovative and exciting musical theater program that brings together typically developing children and children with special needs in an atmosphere of creativity, acceptance and joy. It emphasizes creativity, self expression and social consciousness.”

Hall is the mother of Neal, one of the five children featured. Her “never give up” spirit imbues the film with a kind of tenacity that gives one hope that many kids with autism will be OK because they have someone like Elaine Hall in their corner.

“Autism: The Musical” traveled the film festival circuit in 2007, gathering five Audience Awards at various festivals and was the official selection at another 10 film festivals internationally. Now it will be shown on HBO as part of its documentary series, and you can watch the film’s trailer on the HBO web site. If you don’t have HBO, the film will soon be available on DVD.

“Autism” The Musical” should not be missed!