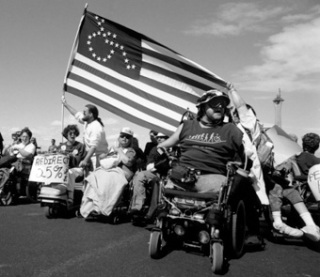 Note: Please spread this review far and wide. I would like this documentary to be used in high school and college history curriculum across the USA. I fear that a few showings on PBS and among disability groups are not enough. This film can educate students nationwide about disability history, which is not included in most curricula.

The documentary “Lives Worth Living” places the history of the disability rights movement where it should be – front and center in American culture. As someone who has been studying news media representation of the disability community since 1989, I thought the film might just be an overview of information I already knew. It isn’t. I am completely wowed by this powerful documentary that packs 50 years of disability rights history into 54 minutes.

The documentary comes from filmmaker Eric Neudel, who has produced, directed, and edited numerous award-winning films such as “Eyes on the Prize,” “AIDS: Chapter One,” “LBJ Goes to War,” “Tet 1968,” “Steps,” “After the Crash,” “The Philippines and The US: In Our Image,” and “Body and Soul.”

In “Lives Worth Living,” the audience is taken on a linear journey from World War II to the 1990 passage of the Americans with Disabilities Act (ADA), which is correctly called the “20th century Emancipation Proclamation” for people with disabilities by Sen. Tom Harkin, who co-sponsored the ADA.

The documentary truly lives up to its description as an oral history because it weaves together a fabulous narrative from disability activists, politicians, and independent living advocates. Filling the film with multiple perspectives are people like Judith Heumann, who is now special adviser for international disability rights at the U.S. State Department, activist Fred Fay, Judi Chamberlin, psychiatric rights activist, California congressman and ADA sponsor Tony Coehlo, Bob Kafka of ADAPT, Dr. William Bronston, who helped get Willowbrook closed, and I. King Jordan, the first deaf president of Gallaudet University.

Fred Fay, who became disabled by a spinal cord injury as a teenager, takes center stage to discuss his life as a disabled person who wanted the same rights as everyone else. (Sadly, Fay died August 20, 2011, and the filmmakers dedicated the film to him.) That theme of equal rights and equal access is embedded throughout the film.

He began his activism in the early 1960s, as he says: “when disability and rights were not two words that went together.” I think this is a significant point that the film explores – how disabled people formed a strong, engaged rights movement when most of American culture saw people with disabilities as “patients.”

Fay makes the point that because people with disabilities had little access to society or were locked in institutions, their “lives were being wasted.”

The documentary makes wonderful use of historic images, some of which are unsettling, such as those of abused and demoralized people with intellectual disabilities trapped in the Willowbrook State School on Staten Island. Dr. Bronston, a long-time advocate of closing all these institutions who let TV newsman Geraldo Rivera into the facility to expose the atrocities at Willowbrook, said he went to work there because he thought he would “go serve in hell and see what he could do.”

The architecture of the Rehab Act and the subsequent protests to get it enforced are explored fully. Heumann explains how the rights movement reconfigured early on to become a cross-disability movement.

The documentary shows the links between the returning World War II disabled veterans, the Rehab Act, the Willowbrook closure, the Deaf President Now movement at Gallaudet, the ADA and even compassionate conservative politics. This is significant because even audience members familiar with these events learn more about how they interconnected and built up the cultural force that finally led to the ADA being passed.

The stakes for equal rights and equal access were so high because as Fred Fay explained, cities like Washington, D.C. didn’t even have accessible sidewalks – “It was like the Berlin Wall on every corner.” The documentary sizzles with enlightening comments like this, which show an audience who might be unfamiliar with disability rights just how insurmountable the fight for justice seemed.

The film spends a good bit of time on the political wrangling behind the proposing of and eventual passage of the Americans with Disabilities Act. It details the story behind the famed crawl-in up the U.S. Capitol steps in the efforts to get the ADA passed. And it even discusses the controversy among ADA supporters about whether it was a prudent idea to stage the crawl-in at all. But as Congressman Tony Coehlo explained, “I loved it because it inconvenienced those Senators.”

Although the film’s focus is history, it still brings to mind how disability rights play out in current times. It reminds the audience how much better America is when people with disabilities live and work in their local communities. In 2011, a 31-year-old man with Down syndrome in Minnesota now lives in his own home thanks to a home security system that assures his family that he is safe. He is building independence and confidence, and his neighbors learn more about independent living and people with intellectual disabilities.

Former Galluadet President I. King Jordan summed up the passage of the ADA this way: “That was the day you guys saw us as your peers.”

And if this film can be shown to high school and college history classes nationwide, maybe a whole generation of people will understand the vibrant history of rights for disabled Americans.