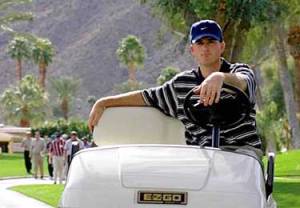 Media’s focus was golf, but the real story was a man with a disability trying to get a fair shot.

THE REAL STORY is about a man, who happens to have a disability, trying to pursue his profession. But much of that has been pushed aside by our national
obsession with sports.

It’s simple: Casey Martin, a person with a disability, is receiving the accommodation he needs, a golf cart, to participate in a public event, PGA competition. The Supreme Court decision of May 29 has garnered much media attention, but some of the stories and columns gloss over the true news in the decision – maintaining the legal rights of all Americans with disabilities.

The real “hero” of the Casey Martin case is the Americans with Disabilities Act (ADA), which is being used appropriately and effectively to halt discrimination in places of public accommodation.

“Casey Martin is Everyman – a talented person with a disability, trying to compete in the world, who needs a reasonable accommodation that does not fundamentally alter the game,” said Cyndi Jones of the San Diego-based Center for an Accessible Society. “America has wasted the talents of Americans with disabilities for decades because of the inability to see and use those talents. It is time to move beyond this discrimination.”

Although not an employment case, Martin was fundamentally asking to pursue his chosen profession, that of professional golfer. He still has to meet all the rigorous golfing standards to make the PGA Tour, and when he doesn’t, he is bumped down to lower level tours, as he has been recently.

All the media stories mention the pain in his leg that makes walking difficult, but too often the implication of their phrasing is that it is similar to a bad back or a sprained muscle and that pain is part of sports. I have collected many of the interviews with Martin during the four years of the case. Although he never complains about the circulatory disorder in his leg, Martin clearly explains that not only is he in severe pain, but constant walking will do more damage to his leg. He has even said that he realizes his right leg will probably have to be amputated at some point. So the golf cart not only allows him to participate in his profession, but also allows him to avoid adding to his disability.

Although I am glad the media did not “medicalize” Martin’s story, I wish they had better explained the severity of his disability. It’s clear that even with a golf cart, Martin physically exerts himself much more than most people playing 18 holes do. But the media are unfamiliar with dealing with people whose disability can be somewhat hidden. And some people with hidden disabilities are reluctant to come “out” because of the stigma heaped on disabled people in our society.

That’s why high-profile lawsuits like Martin’s are so important. They allow hidden disabilities to come out of the closet. And although the media missed some of the “big picture” about the ADA in the case, it allows disability activists to start a national dialogue about disability rights.

“The more people with disabilities are propelled to people’s attention, [and] the media, the better it’s going to be,” said a mother from Denton, Texas, whose son is blind, on National Public Radio’s “Talk of the Nation.” “Yes, a disability can be a royal pain, a major inconvenience, but not the end of the world, as many people think.”

The ADA’s provision that public accommodations, including golf tournaments, not discriminate against people with disabilities is central to the Martin case. But my research shows that many journalists do not understand the ADA or its provisions; context is missing from their coverage. When the media, and in turn, the public, do not understand the disabilities act, backlash occurs – as has been happening with the act for the past decade.

Disability rights organizations have been trying to get a better understanding of the ADA before the public for 11 years, with only limited success in the media. The Casey Martin case is a perfect place to build understanding, but once again the media were sidetracked, this time by sports rather than business interests.

As Cyndi Jones explained, “We would not have a Tiger Woods if it were not for Title II of the Civil Rights Act [bars discrimination based on race, color or national origin] and we would not have a Casey Martin if not for Section 504 of the Rehabilitation Act and Title III of the ADA. We are pleased that the Supreme Court has upheld the Americans with Disabilities Act.”

“Casey Martin is a pioneer in the tradition of Jackie Robinson, Arthur Ashe, and Jim Thorpe,” says Maryland resident Andrew J. Imparato, president and chief
executive officer of the American Association of People With Disabilities in Washington. “His story helps to recast the disability experience in America, where the emphasis is on the disabled person’s prowess and competitiveness as opposed to his heroism in the face of tragedy. He simply wants to have a fair shot at achieving his dream.”

The media rarely make the connection between the United States’ history of racial discrimination and current disability discrimination. Thankfully, sportswriter Pat Forde of the Louisville Courier-Journal did remind his readers of the discriminatory decades of golf, when it was “a whites-only enclave.”

In covering the disabilities act, the media too often focus on the side of business people, who fear that accommodating people with disabilities in the workplace or in public spaces will cost them money.

Ironically, in the Casey Martin case, had the PGA accommodated him from the start, it would have cost the association nothing. (They could probably have asked him to rent his own golf cart). But the PGA’s fight ended up costing it astronomical legal bills.

Linda Kilb, attorney for the Disability Rights Education and Defense Fund in Berkeley, Calif., reminded National Public Radio listeners that the ADA provisions are not unreasonable. They are meant to give people with disabilities a fair shot at participating in society.

“Organizations do not need to change the fundamental characteristics of [their] activity,” Kilb said.

The court looks at whether modifications for the person with the disability are reasonable, whether they are necessary, and whether they fundamentally change the activity, she said.

In the Martin case, the Supreme Court said that Martin using a golf cart would not alter the game of golf, which the court said is about making the shots, not walking to the tee.

Because a golf tournament is public and invites anyone with enough golfing skill to try to make the tour, the disabilities act’s public accommodation provision covers spectators and participants in the sport, Kilb said.

“Life is not merely meant to be a spectator sport,” she said. The ADA “allows people with disabilities to come and give it a shot.”

Another media message that drowned out some of the disabilities act focus was the “Casey Martin as hero” narrative – that his case is somehow unique, and he
deserves special treatment because of who he is, not because discrimination based on disability violates federal law.

In fact, the Martin case is one of many that reinforces the ADA’s tenets: equality and removal of barriers to participation for people all abilities.

“The ADA mandates equal opportunity when it’s readily achievable, reasonable and not a burden,” said Mark Johnson, disability advocacy coordinator for the
Shepherd Center in Atlanta. “This case was about equal opportunity, not someone trying to gain an unfair advantage. This decision tells all of us to pursue our dreams regardless of our differences.”

Golfer Chi Chi Rodriguez said in 1998 that the Casey Martin case is really about ability, not disability.

“If FDR could run the country out of a wheelchair, Casey Martin should be able to play golf out of a golf cart,” Rodriguez said. “That golf cart is not going to hit the ball.”