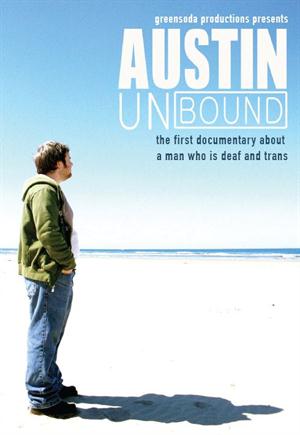 In the new documentary, “Austin Unbound,” which was seven years in the making, the filmmakers beautifully explore the journey of a Deaf transgender man.

It provides excellent insight into the life of Austin, who knew as a small child that he was not in the correct body.  The documentary follows Austin as he prepares for and then receives his double mastectomy.  It also features in-depth interviews with his family, friends and girlfriend.

Filmmaker Eliza Greenwood said at the screening of “Austin Unbound” at the Society for Disability Studies (SDS) meeting in June that her background as a Gallaudet University graduate and as a hearing sister fluent in sign language drew her to the project.

Green said at SDS that they wanted the film to be situated in the “queer-centric and sign-centric community.” The final 45-minute film retains that emphasis.

Austin makes it clear throughout the film that he identifies as a straight man. He gained support from the Deaf community in his journey. He and his friends created a fundraiser for his top surgery with an American Sign Language (ASL) Comedy Night. Austin performed, as did a number of other deaf supporters.

“The Deaf community would be different if not for him. Austin is such a leader in the trans world. He’s so open. He doesn’t care what others think,” a friend from the Comedy Night says in the film.

The film is unique in that it is entirely in sign language and captions/subtitles; even the voices of hearing people are not heard. But that adds to its power.

Austin’s family members are featured in numerous interviews that illustrate the strength that can come from a supportive family.  Austin’s mother, Pam, talks honestly about his early childhood when he rejected everything girl-oriented. She made her peace with his transformation by the time Austin was in high school and supported his decision to dress and identify as male.

Interestingly, his mother’s only regret: that he changed his name.  He is the oldest of four (he has three sisters), and she said loved the girl’s name she chose for him. Some might think she is complaining, but it is a sweet moment in which Austin’s mother illustrates how even supportive family members struggle to accept a transgender person in their family.

In the most wonderful scene in the film, Austin shows his scars from the double mastectomy to his  grandmother, who smiles, hugs him and tells him she is so happy for his successful surgery.

A significant portion of the film is devoted to Austin’s relationship to his girlfriend, Lola. She is there for him in every way. As she goes on this journey with him, Lola is able to reflect on Austin before and after his top surgery.

Lola says his self confidence has increased after the top surgery, and he seems freer since the surgery.

Austin said earlier in the film that he felt he was wearing a Halloween costume as a child when he was forced to dress as a girl.

After his surgery, he summed up the positive change in his life: “I feel like a burden has been lifted.”